The World has fallen back in love with GOLD!

The gold price is on the rise and that is not surprising.

Where leading currencies are falling apart at their seams, global geopolitical uncertainties persist, protectionist policies are in the making and a global recession is becoming increasingly likely, Gold is most certainly one of those solid investment solutions to look at.

The price for gold is now back at over USD 1.300 for the first time since Summer 2018, and has remained fairly steady with demand increasing. 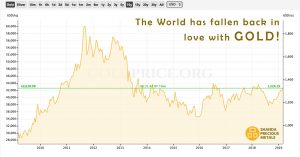 Gold as a safe-haven asset – but who is buying?

First off, central banks have increasingly been adding gold to their portfolios. In fact, they have not been buying gold as much as today since 1971. The World Gold Council (WGC) notes that 651.5 tons of gold reserves have been bought in 2018. A large part of this was acquired by emerging-market central banks in order to diversify their currency reserves away from and reduce their exposure to the USD such as China, India and Azerbaijan.

Exchange-traded funds, which are the most favoured means of investors to buy gold, are starting to rise as well though still not concurrent with the major highs six, seven years ago.

Retail investment in gold has remained steadily on an upward trend rising by 4% last year according to the WGC. Following the Global Financial Crisis (GFC), private investors have been moving their funds into safer assets with potentially less return but a higher safety margin. The mindset not only of the investors that burnt their fingers during the GFC but particularly the younger generation (the Millennials) have become a lot less risk-savvy and are looking for more conservative investments and longer-term solutions.

Gold is increasingly becoming a valuable strategic asset for investors as a source of return, due to its low correlation to major asset classes in both expansionary and recessionary periods, as a mainstream asset that is just as liquid as other financial securities and thanks to its history of improved portfolio risk-adjusted returns.

These variables could well be signalling that 2019 will be a bullish one.

What the figures show:

The above chart shows the price development of gold over the last 10 years and when it reached its historic high in 2011 at USD 1.920 an ounce.

Two things are apparent in this graph, namely the major lows since the bear market low late 2015 / early 2016 (at USD 1.050 / oz) have been higher than the subsequent last which could well be interpreted as a sign for a stronger market.

There is resistance in the market for the price of gold to reach above the USD 1.360-1.380 level for nearly the last 5 years. Experts argue that this level will be the defining level of whether 2019 will turn into a bullish one. So, we are either looking at typical annual fluctuations or a multi-year bull market once the price of gold exceeds the USD 1.420 – 1.450 level. Should gold exceed this level, then a price development of USD 1.520 could be possible according to Money Week’s Dominic Frisby.

Goldman Sachs shares this opinion. Its head of commodities research, Jeff Currie, said that “gold will hit six-year highs this year. $1.450 is the target – some 10% higher than where we are today.”

Gold is an emotional metal, and sentiment a major driver of price. In the near-term though, the price of gold will be heavily influenced by perception of risk, direction of the USD and FED as well as the impact of structural reforms.

Looking in the more long-term direction, gold will be especially supported by emerging markets (which make up some 70% of the demand for gold consumption) and their developing middle class, its role as an asset of last resort and its ever-expanding use in technology.

Whilst everyone is eyeing gold, SILVER deserves a closer look.

At the end of last year Silver sat sluggish at its lowest level since almost 3 years ago, down 15%. With silver being a hybrid metal – part investment but also exclusively used worldwide in an increasing amount of industrial applications, it is worth looking at the possibility that it may become a leader in 2019.

65% of silver demand is used in industrial applications – solar energy and electrical applications. Key drivers will be rising global manufacturing and industrial production. With a shift towards a more sustainable environment, the demand is likely to increase. As with gold, silver will also remain influenced by inflationary pressures, rising fiscal spending and a tighter labour market.

It is also worth looking at the Gold/Silver Ratio which currently stands at around 84,00-85,00, thence not far off from its peak at 86,39 in November 2018 – the cheapest point since 1995. According to Johann Wiebe, lead metals analyst on the GFMS team at Refinitiv, ʺsilver at present would be a good investmentʺ. Peter Spina, president and chief executive officer of gold and silver news and information provider GoldSeek.com, adds though ʺthat investors should look at silver with at least a one- or two-year investment horizonʺ.

If the world comes to a next financial crisis, Silver will be another safe-asset investment.

Do only consider to invest funds that you do not need for your current lifestyle or to cover your liabilities!