A few striking examples how physical gold and silver keep value over currencies and other forms of investment:

Gold outperformed all major currencies since 1900: 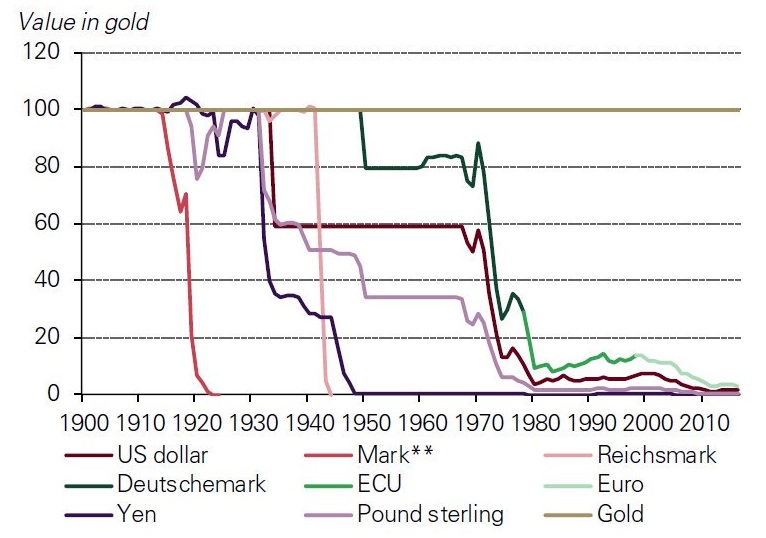 Gold – a century of outperforming currencies

Investment in physical gold is often intended to compensate inflation losses of currencies. The above chart proves the effectiveness of this strategy. Over the last 100 years, gold has heavily outperformed currencies. Global gold production increases 2% annual in average. However, there is no limit to printing banknotes.

Reasons that suggest a substantial rise of gold prices in 2018

“… Gold has recently broken from a technical consolidation formation within a secular bull market started in 2000 ($250) with a potential technical target of $1,450 by the end of the year. Uncertainty in geopolitics with risk of military conflict is gold’s best friend. We had currency wars since 2008, trade wars since 2018 and it looks like military wars are not far. These are ideal conditions for a quantum leap for gold that can push it even above $2,000. Fed’s past chairman Bernanke recently called the present international monetary system “incoherent” and the governor of the Bank of England Carney in 2011 considered the system at a “Minsky moment”. It is I say in unstable equilibrium and ready to collapse and bullish gold.”

More in detail, reasons that suggest a raise of the gold price this year and in future:

Important warning: The above evaluations are the opinion of the authors, which may not materialise in future. The authors do not hold any position in any precious metals at the time of writing this article.

Prices of the past do not necessarily repeat in future. Technical analyses may not be correct or even fail under unexpected influential developments in global and national politics, crises, economic developments, natural occurrences etc.

Do only consider investing funds that you do not need for your current life style or to cover your liabilities!

If you are interested to buy gold for investment or to store your gold with us, please contact us through the form below.
Thank you!